A Physicist’s Resolution Between Darwinism And Intelligent Design

Inspiring integration of the latest in physics with a spiritual perspective. Convincing in the point that since consciousness is part of the universe now (in us), consciousness must have played a part in creating it and guiding evolution at crucial points in evolution. I’ve included quotes from the book.

I’ve added some youtube videos that illustrate the spiritual perspective from which Goswami speaks which is essentially a light form of creationism. Creative Evolution: A Physicist’s Resolution Between Darwinism and Intelligent Design is much closer to science than the videos.

(Dit zelfde boekverslag in het Nederlands: Creatieve Evolutie, Amit Goswami)
This review was written in 2009 and republished here because it is no longer available on Squidoo. It does not reflect my current (2015) opinions on the topic. I recommend the book not because I agree with it, but because it represents a reasonably intelligent modern interpretation of Intelligent Design.

Consciousness chooses among the possible choices

(pages 203-203) “In quantum thinking, genetic determinism gives only part of the answer – the possible variations. However, natural selection in Darwinian form cannot collapse these possibilities into an actual change; that requires consciousness. But if we reinterpret `natural selection’ as choice by nature in the form of Gaia-consciousness according to the creative requirements of the situation, this selection can collapse the possibilities into actually.”

Scientific materialism is a metaphysical assumption

(page 13) “Any organizing principle that is nonmaterial is automatically excluded from science by definition. However, mainstream scientists themselves, biologists included, have a fundamental but unproven metaphysical assumption behind their work called scientific materialism.”

An analysis of the limitations of Darwinian Evolution

A critique of conventional biology

Amit Goswami’s book is many things – among them a critique of the limits of the Darwinian theory of evolution. As such it is, it seems to me, very valuable. The open questions in science are usually not spelled out for lay people as thoroughly as Amit Goswami does in Creative Evolution. Summing up those limitations include:

The last point is the one that is most fundamental, but the other ones can’t be easily explained away either. The basic charge against mainstream biology that Amit Goswami levels is: Darwinian evolution is not a scientific theory because it cannot be falsified as used at present. For this reason he reformulates the theory in various ways throughout the book. Some variations are clearly true, some can be proven wrong. Either way – logic demands more than biology gives.

In other words: is the creativity of nature an ’emergent property’ or the result of some inherent consciousness in the universe? Amit Goswami answers that consciousness is primary and matter secondary. I’m not sure where I stand on this – but I can’t believe that matter itself is creative.

If matter cannot even process meaning or organize consciousness, how then can matter produce meaning and consciousness as adaptive epiphenomena from which nature may select? (p. 19) 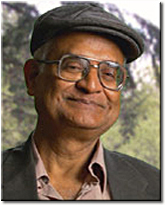 (page 33) “In God-consciousness, we have total freedom to choose among the possibilities that quantum dynamics offers for the states of quantum objects. Conditioning limits this freedom of choice in favor of past responses to stimuli (learning). Eventually, we become conditioned to identify with a particular pattern of habits for responding to stimuli; this identification is the ego.”

Fossil Gaps – about the speed of evolution

(page 15) “According to theoretical predictions of Darwinism and its later versions, there should have been thousand upon thousands of reported cases of intermediates filling up most of the fossil gaps. That hasn’t happened, and therefore the question of the fossil gaps cannot be refuted simply because a few cases of transitional fossils have been found.”

The biological arrow of time

Amit Goswami is a theoretical nuclear physicist and member of The University of Oregon Institute for Theoretical Physics since 1968, teaching physics for 32 years. After a period of distress and frustration in his private and professional life starting at the age 38, his research interests shifted to quantum cosmology, quantum measurement theory, and applications of quantum mechanics to the mind-body problem. He became best known as one of the interviewed scientists featured in the 2004 film What the Bleep Do We Know!?. Goswami is also featured in the recent documentary about the Dalai Lama entitled Dalai Lama Renaissance, and stars in the newly released documentary “The Quantum Activist“

Originally from India, Goswami received his Ph.D. from the University of Calcutta in physics in 1964, from where he moved to the United States early in his career. Fully retired as a faculty member since 2003, he is now engaged in far–reaching national and international speaking engagements. He teaches fairly regularly at the Ernest Holmes Institute, the University of Philosophical Research in Los Angeles; Pacifica, California; and UNIPAZ in Portugal, and is a member of the advisory board of the Institute of Noetic Sciences, where he was a senior scholar in residence during 1998 to 2000.

In the late 1980s Goswami developed an idealist interpretation of quantum mechanics, inspired in part by philosophical ideas drawn from Advaita Vedanta and theosophy. Calling his theory “monistic idealism”, he claims it is not only “the basis of all religions worldwide” but also the correct philosophy for modern science. In contrast to materialistic conventional science, he claims that universal consciousness, not matter, is the ground of all existence, in congruence with mystic sages. Consciousness, deemed as the precursor of physicality, arises from conscious observation through a process intimately connected to wavefunction collapse in a quantum measurement. Once the assumption that there is an objective reality independent of consciousness is put aside, the paradoxes of quantum physics are explainable, according to Goswami.

As a pioneer of a self-styled multidisciplinary scientific paradigm, he refers to himself as a “quantum activist” engaging in research on the “Science within consciousness”, which comprises and explains the “downward causation” and the upwards drift in the fields of physics, biology, and psychology and more recently the healing arts, thus resulting in varied theories of integral medicine based on five interchanging levels of existence: the physical, the vital, the mental, the supra-mental intellect and the limitless bliss state.

Goswami is in favor of lucid dreaming, which simultaneously allows adoption of the equipotency of the waking and the dreaming state and precipitates creativity. He claims that this skill has provided him instantaneous insights regarding superconductivity in regard to the structure of the atomic nuclei. Following this he discovered the self-owned illusion that mind and brain are identical. Topics like death, reincarnation and immortality drew Goswami’s interest of research.

Text of this biography from Wikipedia, which has deleted the article in 2012 because as a physicist Amit Goswami isn’t notable and as a philosopher he isn’t mainstream enough for the site.

Consciousness is the ground of being, according to Quantum Physics – says Amit Goswami. The main point of the book in lay terms. Whereas in ‘Creative Evolution’ he succeeds in staying quite close to the scientific facts – as far as I can tell – in this video he doesn’t merely go beyond what most physicists would agree with, he also talks as if they WOULD.

Amit Goswami, Quantum Physics & Consciousness 2 of 3 – Why do I feel separate from you?

Unity with God-consciousness gives us a whole different worldview. We become a citizen of the universe.

Ultimately it’s about BOTH God consciousness, AND individual consciousness. The place from which I create – there we are ONE. The individual, the I, the ego has to prepare. It then has to use the insight in this world.

Spiritual traditions sometimes denigrate the individual. It’s both the meaning of the individual and the movement of the whole. It can not be otherwise.