I got ‘Goddesses of the celestial gallery’ for my birthday (2010). It was quite a chore to take it home: it’s almost as tall as the desk I’m sitting on (see image below)! (aka Poster size)

Romio Shrestha portrays the main Tibetan Buddhist Goddesses (and a few Hindu ones) in dazzling colors that are meditative at the same time. It’s a feast on the eyes well combined with explanations.

Included are 9 cut out cards for quick reference of which goddess is what. 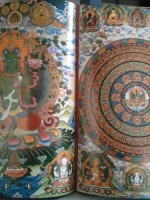 This Goddess is the great mother protectress from danger. 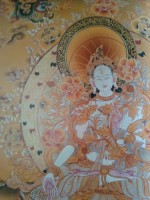 Some of the most beautiful images in this gallery of Buddhist goddesses are the radiant Taras. This one is a white radiant Tara.

White Tara is the symbol of truth and purity and her help is similarly kind and pure. 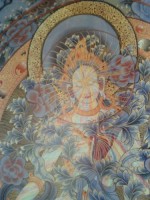 Another beautiful radiant Tara. This one is nearly transparent in her radiance, which is symbolic for the fact that whatever we picture of the Goddess, it’s never quite what She is.

It’s added that once you can visualize Tara as pure light, you should try sound …

Buddhism in Nepal, where Romio Shrestha is from, is a mix of Hinduism and Buddhism. One aspect of this fusion is the worship of gods and goddesses that are usually seen as Hindu, like Kali.

This Goddess stands for necessary destruction.

All of the Celestial Gallery

The follow up volume is what this review is about, focusing on Buddhist Goddesses.

Boldly reinterpreting the age-old Tibetan and Nepalese art form known as Thangka, Celestial Gallery offers beautifully detailed representations of mandalas, or celestial spheres. Simply gazing upon the mandalas is meant to inspire in the viewer a heightened state of intention and clarity. Master painter Romio Shrestha and his team of artisan monks have created postmodern versions of these enlightened Buddha realms from hand-ground malachite, lapis, marigolds, and other rare substances. Painted at times with a mere three hairs from the tail of a cat, these multifaceted scenes of otherworldly deities are rich with hauntingly powerful detail. Depictions of White Tara, Green Tara, the Medicine Buddha, and many other celestial beings invite and inspire meditation and reflection.

Romio Bahadur Shrestha was born into a Newar family in Katmandu in Nepal. When he was five years old, two Tibetan Buddhist monks arrived at the door. Romio, they said, was the seventeenth reincarnation of the master Tibetan T’angka painter Arniko and they gave to him a stock of valuable art materials, explaining that he would, one day, form his own school of painting.

Romio Shrestha is a modern master of the Indo-Nepali-Tibetan Buddhist traditions of enlightenment art. Romio Shrestha’s T’angka’s can be found in many of the great collections of the world including the British Museum, The Victoria Albert Museum, The Buchheim Museum, American Museum of Natural History New York, Newark Museum New Jersey, National Museum Moscow, The Chester Beatty Library Dublin, The Voelkerkunde Museum Zurich as well as many private collections around the globe.

Preserving and innovating the ancient wisdom and traditional craftsmanship, Romio founded a school in Nepal in 1968 and now into the 21st century he continues to bring the world of T’angka on into the future.